Life doesn’t always go according to plan, but if there’s more of a break than you’d intended, there’s an upside.

I had my first two babies 23 months apart. I must admit, I was a little naive when planning it all and I wanted four kids, all close together in age. It came from the fact there were eight years between me and my younger sister, and 16 years between me and my baby brother. I wanted my kids to have each other as they grow up beside each other which is something I didn’t have.

But life didn’t turn out according to plan, and we ended up with a larger gap after the two boys. We were crushed by a missed miscarriage, and then a delay while my body healed, and it definitely took some time to heal emotionally. But when we were blessed with our third child, a little girl, we realised it was all meant to be.

1. The youngest has more help

Since my daughter was about three years old, her big brothers have looked after her when we take the opportunity to lie in bed a little longer on the weekends.

They get her breakfast in the mornings, help get her clothes out of her wardrobe when she can’t reach. At nights they find movies for her to watch and set them up on the TV in their bedroom, and they just generally look after her and help out with the sort of things we would usually do.

Essentially, our older kids are learning about responsibility and helping to look after our daughter, which is a very special gift for them, for her, and also for us.

Just wait until the older ones can help pack school lunches too! Image: iStock.

Having two kids close together brings its own set of financial hurdles. Sure, you may be able to use the same cot and a few other baby items for both babies, but that doesn’t offset the larger expenses like loss of income with one parent out of the workforce, and things like medical costs and clothes they outgrow at a super-fast rate. Oh and there’s the nappies too.

Having babies is not cheap, but being able to spread out that cost over a few extra years is a great thing. It means you can enter the workforce again if you need or want to, and you can get in a few years between taking maternity leave, which is never going to be a bad thing on the hip pocket.

I’ll never forget my two boys fighting over which way the wooden train track wove its way through our lounge room. Or how they now fight over whose friends they play video games with online. Being only two years apart, they’re into the same things, often fighting over who gets a turn on what device and who is more deserving of the last chocolate milk in the fridge.

Those kids with more years between them still argue, don’t get me wrong. But there’s less of the smaller bickering that comes with the territory. My daughter will drag her dolls into her brothers’ bedroom and play on the floor, singing annoying songs while they’re trying to talk to their school friends online. While it’s still certainly painful to hear, it’s nothing like two kids tearing apart a LEGO masterpiece because if they can’t have it, nobody can.

4. Less of a juggle for attention

With kids close together in age, parents often feel torn apart trying to devote the same amount of attention to both kids. It can be a real juggle, and one I’ve experienced myself.

But with one so much younger than their older sibling/s, there’s really nobody else pulling you in different directions. You can sit down and spend time going through sight words or reading a story with your younger child while the others are just happy to have their own space while they finish their homework or do some reading of their own.

It’s almost like your youngest child has the opportunity to feel like what an only child is like. After all, the eldest had their turn already!

Read about the pros and cons of a big age gap between kids, here’s how birth order affects siblings, and this mum experienced both short and long age gaps and here’s what she thinks. 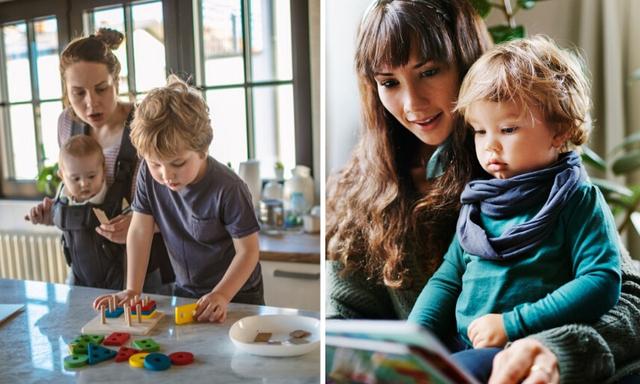 They say the easiest way to teach something is by example. And that’s even more true for siblings. With your first kid, you devote so much time to helping them learn new things. YOu’ll sit down and get messy with sensory play, talk about all the things you’re learning along the way. You’ll be forever proud at how fast their language development is at such a young age.

But those younger siblings have older siblings to show them how it’s done. They will pick up things like toilet training just from watching others achieve their own milestones.

Want to know what’s ten times worse than being awake with a newborn all night? Throwing a toddler into the mix. I was a sleep-deprived mess with my two boys close in age, but by the time we were blessed with our daughter, we’d enjoyed a few restful nights sleep here and there. We were energised and ready to roll with the punches. Our expectations were super low, and we learnt to relax a lot more. Add in the extra awesome weekend sleep-ins once she was older, and the lack of sleep wasn’t anywhere near as bad as it was with the first two. It is pretty cute to watch them together too! Image: iStock.

Melbourne lockdown: Three reasons why isolation won’t be so bad