“This is a new security measure for those customers who don’t do the right thing at self-service check-outs.”

Woolworths has introduced a controversial new measure at self-checkouts in an attempt to stop theft, and some customers have raised privacy concerns.

“For how long has Woolworths been filming me while using self-checkouts,” he wrote. The shopper posted a photo of his self-checkout screen. It listed the items he’d scanned through, and at the top of the screen was an image of his face.

According to Pedestrian.TV, at first Branwell thought it was a glitch.

“I was kind of confused and thought maybe it was a malfunction or something,” he said. “But then I looked over my shoulder and saw the person next to me had the same thing.”

Branwell wasn’t the only one. Another shopper took to Twitter saying they were “shocked” to find out they were being filmed, and raised privacy concerns.

Branwell tweeted what he saw on his self-checkout screen. Photo: Twitter

A spokesperson for Woolworths explained the filming was part of a trial to prevent theft.

“We know the vast majority of our customers do the right thing at our self-serve checkouts. This is a new security measure we’re trialling for those that don’t,” the spokesperson told news.com.au.

“Our stores have staffed checkout lanes for customers who would prefer not to take part in the trial.”

According to Woolworths, the video is not recorded or stored, and the cameras can’t view shoppers as they use the PIN pad. 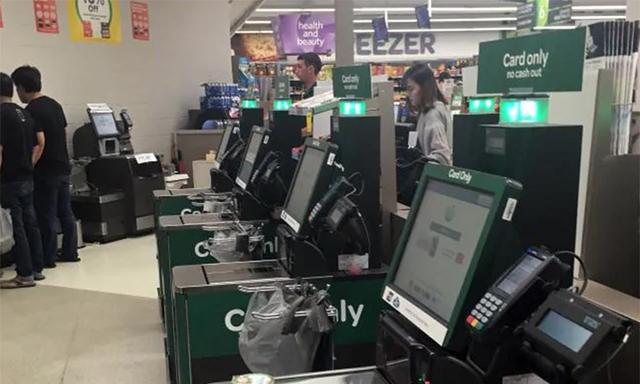 Theft has long been a problem at self-checkouts. Photo: Newscorp

Read about the woman who outed her own husband for self-checkout theft and how one mum stole $4500 in groceries with a brazen scheme.

“Do not remove broccoli stalks”

Woolworths is responding to a trend of theft in self-checkouts that’s been on the rise since the technology was first introduced.

A study last year estimated retailers were losing over $3.3 billion a year due to a surge shoplifting, partly due to people taking advantage at self-checkouts.

The Woolworths move comes on the heels of another retailer taking matters into its own hands.

The shop in Sydney’s inner west posted a sign above the broccoli display that read, “Do not remove broccoli stalks. Otherwise be charged double.”

The issue is apparently so problematic that grocers find piles broken off stems at the bottom of broccoli crates.

“I always break it off and leave it,” one person told news.com.au, acknowledging that the cost savings was insignificant.

“It’s not about the cost. It’s the principle of being forced to pay for a stalk that won’t be used. Similarly, at the butcher I always that any excess fat is trimmed off.”

Another person agreed. “You get charged by weight, so everyone breaks off the bits they don’t eat to get more bang for their buck.”