Grandparents: the providers of free childcare an basic parental saviours… but how many rules is too much to expect when you need some help with child care?

Asking someone to babysit isn’t like asking them to water your plants once a week while you’re on holidays. Watching kids takes a lot of work, and not everyone thinks all children are the bees knees like their parents do. Some parents can be rather picky too, asking carers and grandparents not to load the up on sugar, or to avoid processed foods or takeaway.

But when someone is doing you a favour, how many rules are too many?

“She finally got an offer in her field”

A woman has posted to reddit asking for feedback on a recent decision she made refusing to babysit her grandkids, which could potentially cost her daughter-in-law a job.

“She has been trying to return to the workforce for a while now and she finally got an offer in her field,” the woman wrote in her post.

The children are aged two and four years old, and their mother has organised child care for her return to work, but it starts one week later than her employment is meant to begin.

She said it would end up being nine-hour days caring for her grandchildren after factoring in commute times, and she probably would have done it for her other son, but “watching these children comes with so many rules.”

The woman says it’s too much to ask. Image: iStock.

The children are on a strict vegetarian diet and food is not usually provided. She says her daughter-in-law is “very strict about language” and also has strict rules about the use of television while the children are around, and she sends worksheets for the four-year-old (with the help of the grandmother) to complete.

“There is a very strict schedule,” she said, adding, “I do understand naps but I think the rest of it is too much when I would be doing them a favor.”

But it doesn’t end there. The daughter-in-law also dictates which guests the mother-in-law has when the kids are in her care, which is essentially the main reason she doesn’t want to help.

“The biggest issue is I wouldn’t be able to have anyone at the house while they were there,” she wrote.

“I see my friends almost every day and if I’m providing nine hours of childcare I’m not going to be one-on-one with the kids the entire time.”

It has nothing to do with the pandemic, the daughter-in-law simply thinks the woman’s friends are “bad people” and is “very strict about the influences on her kids.”

So the grandmother told her son it’s too much to ask, and suggested they find a professional.

“He begged me to reconsider but I really don’t want to,” she said, adding, “DIL called crying the other night about how important this job is to her.” 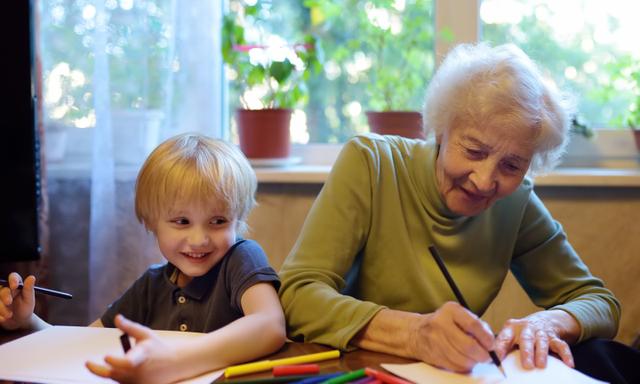 Their mother sends worksheets for them to complete. Image: iStock.

“It’s OK if the rules slide for a week”

The internet was pretty split on this one, with some expressing their annoyance over those who treat grandparents like free childcare, and others suggesting the woman suck it up.

“I’m so sick of people treating grandparents like free childcare,” replied one person. “They’re just kids and it’s OK if the rules slide for a week… that’s why kids love going to their grandparents!! I think you should make it clear that you’d absolutely love to take them if DIL is willing to compromise but if she won’t budge then that’s not on you she can find someone else to be a boot camp instructor.”

Another asked, “Why can’t this be a vacation type of week? Let the kids watch some movies. Take a whole five days off from doing worksheets.”

And one pointed out we’re only getting one side of the story here.

“We are getting a 1-sided skewed version of reality. If we had DIL here, we would have the other end of the spectrum.”

And really… whatever the two women’s issues are, surely they can both compromise for one week.

“You’ve been asked to help for a WEEK,” wrote one person. “Yes OK the rules are a bit much but you’d rather your DIL not get this job to support the family because it would inconvenience you for 5 whole days. Do the right thing and help your son and DIL out.”

Compromise needs to come from both sides here. The mother expecting free child care need to back off from the worksheets and excessive rules if the new job is so important to her. But also, what grandmother would refuse her own grandkids for just one week? Don’t most grandparents sneakily break the rules behind their kids’ backs anyway? Is it really that big an ask?

Gastroschisis: My baby’s intestines were outside of her body