“Sometimes, we force these expected characteristics based off biological sex, and *gasp* we’ve gotten it wrong.”

Gender reveals are one of those things that really aren’t necessary, but can be a fun way of celebrating the sex of your baby. But with all that we’ve learnt in the last few decades, how can we assume to know how our child will identify when they’re ready? It kinda makes the whole concept of celebrating whether you’re carrying a “blue” or “pink” bundle seem rather short-sighted.

A mum from Ohio in the US has highlighted this, by throwing her teenage transgender son a belated gender reveal and the amazing photoshoot has gone viral.

“The first thing we wonder about when we get pregnant is, is it a boy or girl,” wrote mum, Love Gwaltney in a Facebook post where she shared the images taken by photographer, Sarah McBride.

“We get so excited, picking out clothes and nursery decor based on the sex of our babies. We throw parties, and pick out names. We assign attributes (like strength or beauty) based on what our child has growing between their legs. And MOST of the time, that works out perfectly fine.”

Love goes on to say that sometimes we force certain characteristics on to our children based on their biological sex, and sometimes as parents we get it wrong.

“Sometimes, we force these expected characteristics based off biological sex, and *gasp* we’ve gotten it wrong,” she said.

Considering a gender reveal? This woman’s fart revealed nothing because she’s not pregnant, but LOL, this dad started a bushfire with a ridiculous gender reveal, and these influencers used a customised SUV as part of their announcement. 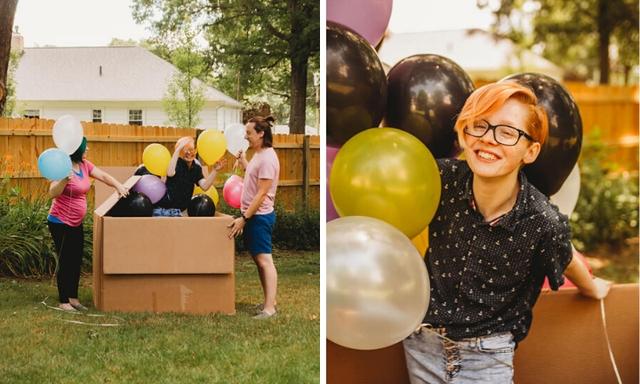 “Sometimes that child disassociates who they are with the body they possess, and it can come across as body dysmorphia or self-esteem issues and that’s as far as it goes (to your knowledge). Other times, that child grows up feeling like a completely different person, and if you’re really lucky, they open up and tell you the truth, no matter how scary or daunting that could be,” she wrote.

Love admitted that 17 years ago, they got it wrong when they announced they were having a girl named Mackenzie, and are now celebrating the reveal of their son named Grey.

“So, we’d like to introduce you to our SON: Grey,” Love wrote. “He’s much like any other 17-year-old nerdy boy, stays up way to late gaming, hates showering, and eats too much junk food. We will be referring to Grey with he/him pronouns from here on out, but he told us to tell you that he also doesn’t mind if you use they/them.” 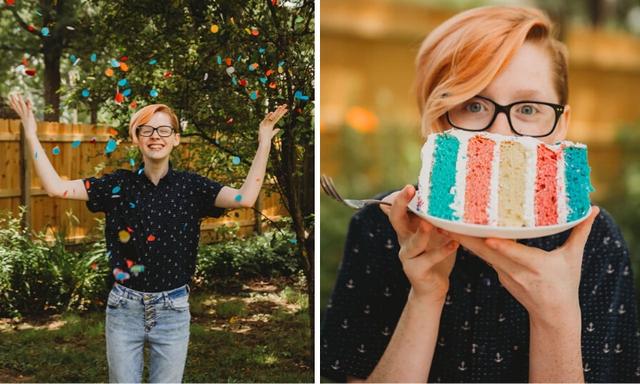 “A tongue in cheek announcement”

We spoke to Love about where the idea came from, and she said Grey came out to herself and her partner, Brandon, and the news coincided with Love’s anatomy scan (she’s currently pregnant), so they couldn’t resist using it as an opportunity.

“Grey had come out to Brandon and I a couple months prior,” Love told Kidspot. “But was hesitant to fully share with family. So we suggested the gender reveal as a tongue in cheek way of announcing.”

“It lined up perfectly with our current baby’s anatomy scan. It is ironic, because if you know us, we are team green and don’t find out the sex of our child, and we also think gender reveals are kind of silly. So our friends were all a little taken aback when I started asking about a cake for a gender reveal.”

Love said Grey was “a little hesitant” at first because he wasn’t sure if he was ready to reveal himself to the extended family, but then “quickly got on board” with the idea. 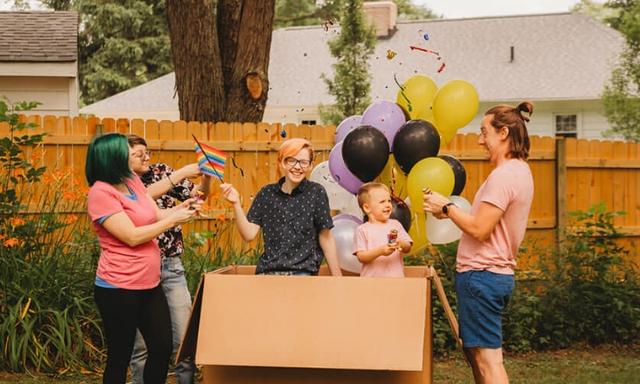 “The response has been overwhelming”

Love says she has received an outpouring of love and positive messages from the transgender community.

“The private messages from other transgender people has been both heartwarming and devastating,” she said. “There are so many non-binary/ trans people that do not have any support. That have reached out to us privately to tell us their story and to thank us for being such accepting parents.”

Responses online were mostly positive, but Kidspot are not going to highlight any of the negative responses here.

“This is so sweet! So happy for your family and for Grey!” wrote one person. “I wish him all the happiness in the world! Thank you so much for being good people and parents, the world needs more of this!”

Another added, “This is so beautiful, it brought me to tears. Congratulations!!”

“I love this family so much!” commented another, adding, “So much love and respect and kindness going on. The pics and celebration are beautiful! I’m sure this journey hasn’t always been easy, and yet the love and joy in your eyes speaks volumes about what’s in your hearts.”

And one person made a very valid point: “What a beautiful family and a beautiful message. Something we can ALL learn from. Thank you for having hearts of gold and loving your babies just the way they were created!”